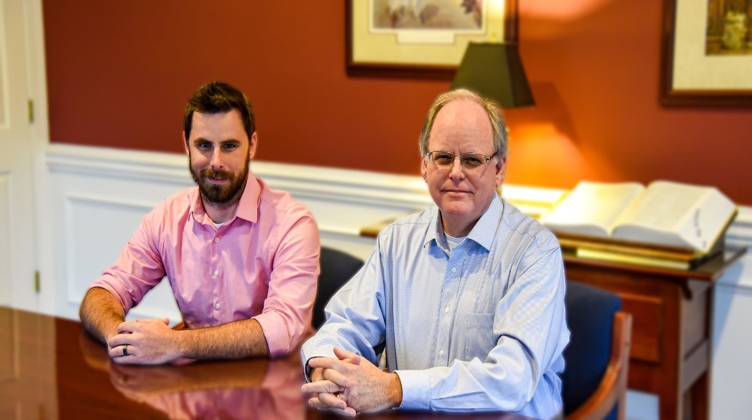 Dozier Law, P.C. has been a staple in the Effingham community for over two decades. Dennis G. Dozier, Sr., a Virginia Beach native, has lived in Effingham for over 26 years. As a proud husband, father, and grandfather, Dennis feels that family is a priceless commodity. He and his wife Mary Lowell Dozier have been married for 45 years.

“I have a very supportive wife and family. I live in a wonderful community, and I don’t take anything for granted,” he says.

Dennis and Mary Lowell have three children: Dennis Jr., Adam, and Savannah, all of whom are involved in helping the business thrive. Dennis Jr. is the general manager for the firm and is completing his law degree.

Adam, who is also an attorney, has worked alongside his dad for over six years.

Savannah is co-owner of Brand Local Communications, and she handles the law firm’s social media marketing. Dennis and Mary Lowell have five young grandkids who they just love to pieces.

Finding His Way to Law

Law was not Dennis’ first career choice. After relocating to Georgia from Virginia Beach in 1972, he attended Georgia Southern University, where he obtained a Bachelor of Science Degree in Economics in 1976. He later earned his Master of Business Administration Degree from University of Georgia.

After graduating, Dennis managed his father-in-law's agribusiness firm in Southwest Georgia for over 11 years. However, he never became settled in his career.

Understanding the principles that he strove to incorporate into his own life, combined with his interest for the welfare of others, Dennis looked toward the field of law, enrolling in the University of Georgia’s School of Law.

Dennis recalls his humble beginnings, remembering when he and Mary Lowell, taking a leap of faith, sold their home and moved to Athens with their little ones. Mary Lowell was committed to caring for their three small children while Dennis was a full-time law school student, so there was little household income. During that time, he is certain that he learned the real meaning of “starting anew.”

All the sacrifices, along with the hard work and diligence paid off, as Dennis earned his law degree in 1995.

The family then moved to Effingham, where Dennis began practicing at The Ratchford Firm before starting his own practice in 1999.

From the start, Dennis knew the need to incorporate strong character, conviction, and commitment to principled behavior into his business. To this day, the Dozier Law, P.C. team takes pride in reflecting dignity, honor, respect, and integrity.

“We always stay with the truth,” Dennis commented.

He agrees that a lawyer’s job is much different than what the public may perceive, largely due to the questionable actions of those who have made dishonorable practices commonplace; these actions shamelessly tear away at the very foundation on which the entire U.S. justice system was built.

Dennis and his team know that it is all about people—helping with their issues in the best ways possible. Over the years, Dennis has assisted a multitude of clients, including those seeking help with domestic issues, criminal problems, divorce, personal injury, financial problems, and estate planning.

“I love what I’m doing—helping ordinary people solve not so ordinary problems,” he said.

Without question, Dennis knows that the man he is and his unwavering values are greatly due to both his parents: Rev. John Wesley Dozier and Viola Endrich Dozier.

“I had wonderful parents; I was very blessed,” Dennis says.

He is confident that much of his work ethic comes from his dad John, one of his biggest inspirations. John was a WWII pilot. He later attended and graduated law school. Though he never chose to practice law, but he did remain in the field of law and justice, becoming an FBI agent. Over time, however, John began to feel that he had a significantly different calling; he went to seminary and became a chaplain in the U.S. Navy, and later, a Presbyterian minister.

Much of that has trickled down into Dennis’ life today. He and his family enjoy attending church together. He remembers hearing a beautiful and heartfelt prayer that his five-year-old grandson Mason prayed to the Lord Jesus Christ. There were few words that the proud granddad could utter in response to the tender moment.

Speaking of Mason, he is actually a little star, largely due to the efforts of his Granddad Dennis—the children’s book author. The attorney also writes children’s books.

Dennis always enjoyed telling his children bedtime stories when they were young. Though he made up a different story each time, many of the stories had one thing in common: a big, pink, and very friendly dragon.

Remembering those times, Dennis was inspired to write some of the stories, and he has now written a seven-book series. The books are about the friendly dragon named Pinkerton Pernelli—a name given by Dennis and Mason because the dragon is pink and weighs a ton. Pinkerton learns and shares a lot of valuable lessons, helping others along the way.

All the stories teach underlying morals and values in a very kid-friendly manner. Pinkerton is often accompanied by his best friend Mason, a happy, curious, smart, and very helpful little guy who teaches a lot of great lessons himself. Mason’s real-life best friend Arden also shows up as a story character.

Each book is filled with fabulously-illustrated pictures, colorful scenes, and clever rhymes, encompassing an exciting, fun, and insightful story.

Young readers are sure to enjoy the many adventures of Pinkerton and Mason.

Dennis loves time with his family. He feels very blessed in life and is looking forward to a beautiful and fulfilling future.